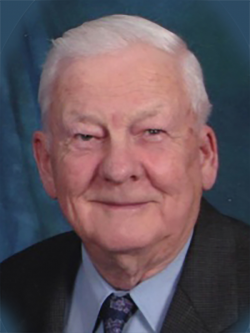 Robert and his late wife, Inez, owned and operated the Hampton Diner in Fort Lawrence from 1956 until their retirement in 2003.  While living in Fort Lawrence, Robert’s interests included family, his church and he, Inez and Stephen loved having morning coffee with the "coffee group" at McDonald’s on Albion St.  Robert, Inez and Stephen attended the First Baptist Church in Amherst and Main St. Baptist Church in Sackville, NB.

Following Inez’s passing, Robert moved to Ste. Anne’s Court in Fredericton to be closer to Danny,  Rhonda and family.  Robert enjoyed living at Ste. Anne’s, and made many good friends especially his table-mates, Warren and Ken.  He would often say that he dearly missed Inez and Stephen and their home "on the marsh" in Fort Lawrence.

In addition to his parents, Robert was predeceased by his wife, Inez and their son, Stephen; grandson, Robbie Copp; niece, Beth Crossman; brothers-in-law, Sydney Alcorn, Murray Justason and Murray Crossman.

Robert’s family wishes to express their sincere gratitude to the management and staff at Ste Anne’s Court, the Wellness Center, Extra-Mural Nurses, EMS responders, and the doctors and nurses of the ER and 4SE at the Dr. Everett Chalmers Hospital.

Arrangements have been entrusted to the Jones Family Funeral Centre, 70 Church St., Amherst, NS (902-667-8777).  Visiting hours will be held from the Amherst First Baptist Church on Thursday, January 5, 2023 from 1 pm until 2 pm, followed immediately at 2 pm by his funeral service, Rev. Jeff White officiating.  Burial will take place in the Fort Lawrence Cemetery in the spring.

Those wishing to make a donation in memory of Robert may do so to the First Baptist Church, or the charity of your choice.

Condolences may be sent to the family by visiting www.jonesfamilyfuneralcentre.ca or through the Jones Family Funeral Centre Facebook page.