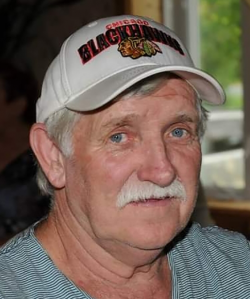 It is with heavy hearts that we announce the passing of Clayton Harry Martin, 73, of Amherst. Clayton passed away on Wednesday, August 10th, 2022 at the Cumberland Regional Health Care Centre, 2 short months after his wife Odette.

Born in Springhill, NS, Clayton was the son of the late Fred and Minnie (Gaudet) Martin, as well as a very special adoptive mother Anita (Gaudet) Bulmer.

Clayton, formerly known as "Norton" enjoyed spending time with "the boys" getting into many "questionable" situations. They enjoyed fishing, driving around, camping, sports and following the band. When Clayton was with the guys you were never without a bottle opener! Time spent with him was always a laugh therapy session! He claimed he was fluent in Russian and Chinese although this was never officially proven!

The time that he didn’t spend working at Premdoor and Jeld-Wen over many years, he had many projects on the go. He also enjoyed spending time cooking/baking, gardening, constructing anything and everything and listening to music even if it was for only part of the song.

More than anything he loved spending time with his beloved wife, children, grandchildren, family, friends and his one and only Jersey cat.

He was predeceased by his loving wife Odette; brothers Camille and Fred.

Arrangements have been entrusted to the Jones Family Funeral Centre, 70 Church St, Amherst, NS (902-667-8777)  where an Afternoon of Remembrance will be held on Wednesday, August 17, 2022 from 2 until 4 pm.  Special words and memories will be shared at 3:30 pm. Burial will take place in the Saint Charles-Nativity Cemetery at a later date.

Donations in memory of Clayton may be made to the charity of your choice.