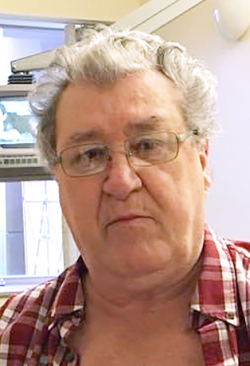 It is with deep sadness we announce the passing of John "T-Jean" Ephraim Briand, age 79, of River Hebert, and formerly of L'Ardoise, Cape Breton at the North Cumberland Hospital, Pugwash on Monday, August 8, 2022.

John enjoyed knitting, Bingo, and crossword puzzles.  He loved to cook and keep people happy with a good meal.  He was quite a jokester and storyteller, as well as a talented musician and songwriter.  He absolutely adored seafood, and in particular a good feed of clams.

Besides his parents, John was predeceased by his daughter Mary; his grandson and two great granddaughters as well as his sister, Sarah-Ann Scott.

Arrangements are under the care and direction of Jones Family Funeral Centre, Amherst, NS, (902 667 8777). Cremation has taken place.  A Celebration of T-Jean's life will take place in L'Ardoise at a later date to be announced.

Donations in memory of John may be made to the Canadian Cancer Society.

Sharing of memories and condolences may be sent to the family by visiting John's online memorial at www.jonesfamilyfuneralcentre.ca or through the Jones Family Funeral Centre Facebook Page.