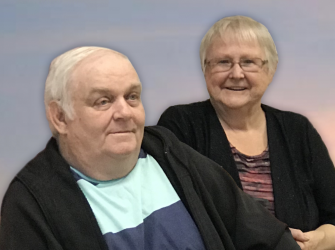 They both loved the radio, either Ham or CB; Betty always did the Sunday Night Check-In (Eco Charlie).  Roger worked for many years at Sifto/Domtar Salt Company.  He enjoyed time on computers, and loved the outdoors, always maintaining his property, or spending time in the woods, hunting and fishing.  Betty was a housewife.  She loved quilting, crafts, prepping family dinners, making pickles, baking and cooking.  Like Roger, she loved the outdoors and could often be found out gardening when the weather was fit.

They were predeceased by their brother in law Richard Taylor.

Arrangements are under the care and supervision of Jones Family Funeral Centre, 70 Church Street, Amherst (902-667-8777) where an Afternoon of Remembrance will be held on Wednesday, June 15, 2022 from 2 until 4 pm, followed immediately at 4 pm by a Graveside Service in the Fenwick Cemetery.

Donations in their memory may be made to the Roger and Betty Boss Fire Relief Fund.

Sharing of memories and condolences may be sent to the family by visiting their online memorial at www.jonesfamilyfuneralcentre.ca or through the Jones Family Funeral Centre Facebook Page.