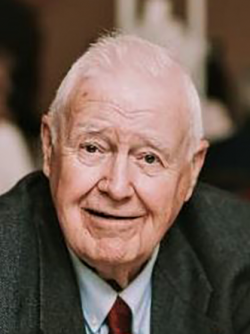 It is with deep sadness we announce the peaceful passing of Robert "Bob" Allan Nixon, age 90, of Amherst. Bob passed away at the Cumberland Regional Health Care Centre, surrounded by his loving family, on Sunday, April 10, 2022.

Born in Moncton, NB, he was a son of the late Homer and Agnes (Wilson) Nixon.

After attending Mount Allison University, he became a Chartered Accountant, and later became a partner with HR Doane and Company, managing offices in numerous communities.  He volunteered for the Kiwanis Club, Rotary Club, the Senior's College, the Amherst Golf Club, and the YMCA, to name a few.  He was a Shriner.  In 2005 he received the Distinguished Service Award from the Amherst Rotary Club.

He was predeceased by his wife June; sisters Margaret, Mary and Bunny.

Arrangements have been entrusted to the Jones Family Funeral Centre, 70 Church St, Amherst, NS (902-667-8777) where visiting hours will be held on Tuesday, May 10, 2022 from 1 pm until 2 pm, followed immediately at 2 pm with his funeral service, Pastor Scott Balser officiating.  A reception will follow.  Internment will take place in the Amherst Cemetery.

Donations in memory of Bob may be made to the Cumberland YMCA, or the Amherst Rotary Club (for Camp Tidnish).