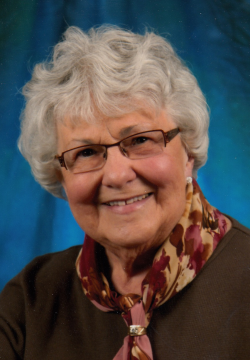 The world and Amherst specifically lost a lovely person when Isabel Cecelia Jackson passed away on Thursday, March 3, 2022 at CRHCC after a quick slip into poor health. She was with her three children Karen, Ron, and Ken right up until the end.

Born in Port Elgin, New Brunswick on March 25, 1928, she was the daughter of the late Fidele and Bella (Fagan) Landry.

After graduating from high school Isabel attended Teacher’s College in Fredericton. She spent her first year as a teacher in a one room schoolhouse just outside of Port Elgin. She then taught in Sackville, NB for 5 years before getting married and settling in Amherst where she continued teaching, before starting a family. In 1966 she returned to teaching at St. Charles school where she was lovingly called the "honorary sister" as the only non-Nun teacher. Her teaching career continued at Acadia Street School when primary became part of the public school system.

"Mrs. Jackson," as she was always referred to by her former students was a highly respected primary school teacher for 30 years in the Amherst school system. She always maintained a relationship with her "kids" after they moved on and went on to teach many of their children. Isabel was considered by many as the ideal type of teacher for young children, kind, patient but sincerely caring for the children in her classes. She was especially aware of kid’s home lives and their needs and made sure that every child felt special…even before this was considered an innovative idea. She also served as an honorary "principal" as she had strong organizational mindset as well.

Isabel was an active member of St. Charles Parish and later its successor Holy Family Parish. She taught Sunday School, served as a Eucharistic Minister and was a member of the Parish Council for several years. She was actively involved with the St. Vincent de Paul Society and served a term as Nova Scotia President and Regional Representative of Atlantic Canada. It was in this role that she was selected to attend the beatification of the Society’s founder at Notre Dame Cathedral in Paris, a service presided over by Pope John Paul II.  Isabel was also a member of the CWL for over 65 years and was awarded the Maple Leaf Service Award Pin. For her years of dedicated service to the Parish she was awarded the Diocesan Medal of Merit.

Isabel’s focus was squarely on her community at large. She was instrumental in founding the Amherst Food Assistance Network Association as well as a pre-school program at Heartz Hall many years ago. She was also involved with the Arthritis Society and United Way for many years. For her work in the community, she was named Amherst’s Volunteer of the Year in 1997, an award she accepted with great humility.

Isabel was one of those kind-hearted, loving people who had a positive influence on just about everyone she knew. From her own children and grandchildren to whom she provided unconditional love and support; to her years as a respected primary school teacher; to her work in the community and her church; and her weekly bridge games with "the girls."  Isabel will be remembered as a humble, generous, and loving person. She always put her own interests second and always had a positive word of support for someone in distress. She loved to bake and laugh and pat the many lucky cats who got to call her mom as well.

She was predeceased by her husband, of 57 years, Harold F. Jackson formerly of North Sydney in 2009 and her brother Donald "Buck" Landry of Port Elgin, NB in 2017.

Arrangements have been entrusted into the care and guidance of Jones Family Funeral Centre, 70 Church Street, Amherst, NS (902-667-8777) where a visitation will be held on Wednesday, May 18 from 2-4 and 6-8. A funeral service will be held on Thursday, May 19 at Holy Family Catholic Church, Amherst. Interment will follow in the St. Charles-Nativity Cemetery.

In lieu of flowers, donations in Isabel’s memory may be made to the Amherst Food Bank or the charity of your choice.