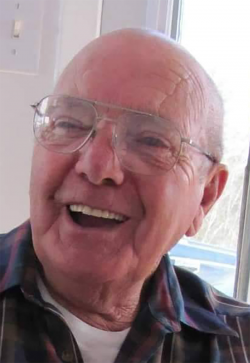 It is with extreme sadness the family announce the passing of Dara Oswald Roy Wilson, 82, on Monday, January 10th, 2022 at his home in River Hebert, just eight short days after losing the love of his life, Lois.

Dara was the youngest son of the late Frederick and Serena (Lennox) Wilson.

Dara grew up at the Head of the River and worked alongside his father and brothers in the woods and on the farm. He later moved to Fredericton, NB, where he worked at Capitol Co-op delivering feed and peddling milk. While he was in Fredericton he met Lois. They married and moved back to River Hebert to work on the family farm which later became known as River Hebert Holsteins. Dara also received the Dairy Award of Excellence for several years.

Dara enjoyed working and being around kids. He became a 4-H dairy calf leader where he helped work at many 4-H canteens that were held at the Bull Test Station in Nappan and headed up the banquet committee. He was also the president of the Cumberland County 4-H Leaders Council.

He enjoyed playing Santa for many church Christmas concerts. He also helped Lois with Guides when needed especially with the building of the Guide camp in Middleboro, NS.

Dara became a member of the Cumberland County School Board and was the Chairmen of the River Hebert Medical Board helping build the medical building and bring medical staff to the community.

Besides his parents, he was predeceased by his wife of 59 years, Lois, daughter Serena, granddaughter Nicole, brothers Jim and Bill, sister Audrey, brothers-in-law Carl, Carl, Bill and Don and sisters-in-law Marg, Dayle, Estella and Thelma.

Arrangements are under the care and supervision of the Jones Family Funeral Centre, 70 Church Street, Amherst, NS (902-667-8777). Honoring Dara's wishes, cremation has taken place and a service will be held at a later date.

Donations in memory of Dara may be made to Cumberland County 4-H or the Dr. D.M. Cochrane Medical Center