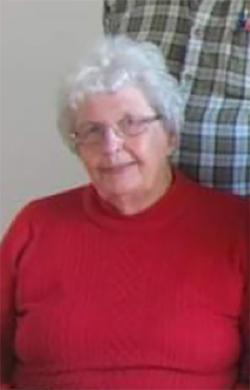 It is with great sadness that we announce the passing of Lois Wilma Ann Wilson, 83, of River Hebert, NS. Lois passed away at the Cumberland Regional Health Care Centre on Sunday, January 2, 2022.

Born in Stanley, NB, she was a daughter of the late William and Katherine (Pond) Jarvis.

Lois grew up in Stanley, NB. After graduating from Stanley High School, she moved to Fredericton where she worked for Sears Roebuck. While in Fredericton she met and fell in love with the love of her life Dara.

They married and moved to River Hebert to work on the family farm and started a family of their own. As the kids got older, she got involved in the Girl Guides of Canada, being a Guide leader and later a Division Commissioner and served on the Provincial Council. She was involved with the building of the Girl Guide Camp in Middleborro, NS. She also helped Dara with 4-H, who was a 4-H leader.

Besides her parents, she was predeceased by a daughter Serena, granddaughter Nicole, sisters Estella, Thelma, brothers-in-law Jim, Bill, Carl, Bill, Carl and Don and sisters-in-law Audrey, Dayle and Marg.

Arrangements are under the care and supervision of the Jones Family Funeral Centre, 70 Church Street, Amherst, NS (902-667-8777). Honoring Lois's wishes, cremation has taken place and a service will be held at a later date.

Donations in memory of Lois may be made to Girl Guides of Canada.