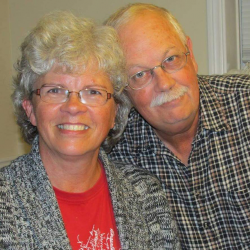 It is with profound sadness that we announce the passing of Chris Sinclair, age 68, in the comfort of his own home, surrounded by loved ones, peacefully, on Monday October 18th 2021, in Amherst NS and was predeceased by his parents and his brother Rob.

Chris, born in Kingston, Ontario, January 13th, 1953 was the son of the late George and Lilian (Shambrook) Sinclair.

Chris grew up in Kingston Ontario and spent much of his youth and adult years as an avid outdoorsman and a proud family man.

Although Chris had a full career as a dedicated steel worker, he had had a love for life, enjoyed history, his Wilton Cheese Factory curds and was an avid outdoorsman.  His love for hunting and fishing was only surpassed by his love for his wife, children, grand and great grandchildren.

Chris would often recount his adventures with friends out in the wilderness, hunting and fishing; spend countless hours talking about history, but would truly light up talking about his 3 daughters, his loving and doting wife, Betty, and his grand and great grand children.

Chris will leave an unquestionable legacy to those that knew him, especially to those that were fortunate to call him family or friend. Chris had an infectious smile and laugh, and when added to his personality, created a persona that would be hard pressed to be matched by the kind of personality that is often only found in characters written by a literary genius.  Chris was always quick to listen, to show others support and gave advice that was truly thoughtful and impactful.  He was one to never command respect from others but truly earned others respect unconditionally through his actions.

The world has truly lost a special and one-of-a-kind person.  The family has not only lost a patriarch that would do anything to protect and provide for them, but they also lost a true friend.  He always opened his heart to everyone.  He will be missed.  He was always a guiding light, principled and caring.  His guiding spirit, memories, life lessons and words will be remembered, followed, honoured and everlasting.

Chris, was a proud, loving husband and will be missed everyday by all those that knew him.

Chris is survived and will be deeply missed by his loving and caring wife, Betty (Morash) whom they just celebrated their 38th wedding anniversary on October 15th.  Chris is also survived by his daughters Elizabeth (Michael), Kristen, Sherrie (Shane), grandchildren Kevin, Christopher, Tyler, and Maddy; great grandchildren Paisley and Sadie.

The family would like to extend a special recognition to the exceptional medical staff for their personal and dedicated  support to us and more importantly, to Chris.

Donations in memory of Chris may be made to the charity of your choice.