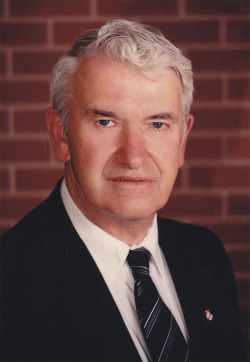 The "Farmer" has died.  His family, his friends, his Province and Country have lost a very remarkable person on Monday, October 4, 2021.  The years of Roger's life are so full or achievements and successes that it is impossible to list, describe or even refer to them all.  At a special "Thank You" Dinner in his honour a few years ago the description of his life and accomplishments covered three type-written pages.

Foremost Roger was always a farmer.  He succeeded with his dairy farm, with blueberries and strawberries.  As a businessman, he engaged in trucking, auctioneering and a Par 3 Golf Course.  As an athlete he played hockey and softball.  He earned many trophies in curling and golfing.  He won speech contests and trophies for acting, one for the Maritime Provinces.

His service to his community and the public started as a Cumberland Municipal Councillor in 1958 and did not end until 1993.  During that period he served as a Deputy Warden, as Chairman of the three school boards, as Minister of the Crown (Tourism, Housing, Environment, Agriculture and Marketing), as Deputy-Premier and as 21st Premier of the Province.

The "Farmer" was a member or officer of numerous clubs and organizations, as well as an Honourary Member of many others.  He received many honours and awards, including the Distinguished Service Award from the Cumberland Health Care Foundation and the Paul Harris Fellowship Award from the Rotary Club of Amherst.  In 2005, Dalhousie University awarded him a Doctor of Laws, for his life-time of service to agriculture in Nova Scotia.

Since retirement from politics in 1993, he kept busy once again helping on the farm and with leading the Above and Beyond Campaign to raise $7.5 million dollars for a new hospital.  Until recently he used his auctioneering skills for hundreds of charity auctions.  For over 25 years he lent his name and support to the Bacon-Elliott Bursary Program, which was benefitted over 70 students.  He has setup and funded the Clara Bacon Bursary Fund, which has assisted hospital employees to upgrade their education.

It is a key and persistent characteristic of Roger's life that he has forever credited and thanked others for his successes and accomplishments. At the top of the list was always his beloved wife, friend, partner and soul mate Clara.  They supported each other and were devoted to each other for 68 years until her death in 2013.  Roger was born in 1926, the youngest of 8 children of Clinton and Lillie Bacon.  He was predeceased by all of his siblings.

He is survived and will be sorely missed by his three children, Douglas (Diane); Diana (Bruce) Saunders and Deborah (Cecil, deceased) Carter; grandchildren, Jason Bacon; Adam (Denise) Bacon, Patricia (Henry) Auchnie, Andrea Jackson, Celine Theriault, Christa Doncaster and Amy (Christian) McGraw; 13 great grandchildren.  Roger's family is deeply grateful to Marjorie Milner and Laura Allen as well as the caregivers from Lean on Me Assisted Living Services.  He was deeply loved by all in his family and greatly admired at the many large family reunions that took place at his farm.  Roger loved people. He had a large circle of friends.  He will be missed far and wide.

Arrangements are under the care and guidance of Jones Family Funeral Centre, 70 Church Street, Amherst (902-667-8777), where visiting hours will be held on Thursday, October 7, 2021 from 2 to 4 and 6 to 8 pm.  The funeral service will be held at the Trinity St. Stephen United Church, Amherst on Friday, October 8, 2021 at 2 pm.  Burial will take place at the Amherst Cemetery next to his beloved Clara.

In keeping with COVID-19 Restrictions, all people attending visiting hours and the funeral will be required to provide proof of Double Vaccination and Government ID in order to enter the funeral home or church.  Masks must be worn at all times.

Those wishing to make a donation, may do so to the Clara Bacon Fund at the Cumberland Health Care Foundation or to the Bacon-Elliott Bursary Fund of the Cumberland North PC Scholarship Society