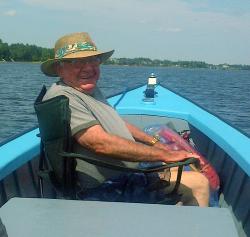 It is with great sadness we announce the passing of Daniel (Danny) Joseph White, at Amherst, N.S., on June 6, 2021 at the age of 88 years, after a long battle with COPD.

Danny went to Ontario at an early age to work "on the boats" on the Great Lakes, later was with the Boilermaker’s Union, working in Toronto. He and Ruth lived in Brantford, Ontario for many years returning to N.S. in 1993 to live in River Hebert, close to Ruth’s Mom to offer their support to her.  It is well remembered that every day of every week of every month of every year, until Ruth’s Mom – Margaret Stewart – died, Danny went to her home every morning at 5.am. just to check that she was sleeping well, returning with Ruth every afternoon and evening to prepare her supper and to play cards and visit. He was one in a million.

Danny was a good Catholic and a good Protestant. He believed God dwelt in both churches so he attended both churches – that was ‘just Danny’.

Danny’s nickname was "Mr. Clean" and to all who knew him, he was aptly named. He volunteered at the River Hebert Fire Department cleaning the trucks – and they did shine!  He spent his summers – after Ruth’s passing – at Bruce and Margaret Rose’s home in P.E.I., where he continued being ‘Mr. Clean’ both in the house and in Bruce’s shop.  He loved to sit around in the evening enjoying a glass of wine with Bruce and Hilton – and particularly loved boat rides on Hilton’s boat.   He was also the best kitty-sitter ever!

Danny is survived by his sons, Mark ( Kerry) White, of P.E.I. and Jeff White of Amherst, N.S.,  step-son, John Burnett, of Comox, B.C., daughters Donna Burbine, of Ontario and Rose White, of Halifax, N.S. and sister Myrna Leman, of New Brunswick, as well as many grandchildren, great grandchildren, nieces and nephews.

Danny was pre-deceased by his wife, Ruth Evelyn White, his daughters Wilma White and Valerie Smiley, his mother and father, Frances and Placid White, brothers Cecil, Bernie, Curtis and Junior and sisters, Hazel, Doris and Ruby.

Danny’s friends extend from coast to coast, he loved and was loved by so many, and we would like to particularly mention three special friends, Alan, Louise and Hilton. Alan your help to Danny these past months was so special, the family thanks you.

Jones Family Funeral Centre, 70 Church St., Amherst, N.S. are entrusted with the funeral arrangements.  In lieu of flowers donations would be gratefully accepted by the Lung Association of Nova Scotia and the Cancer Society.   Condolences may be expressed to the family by visiting www.jonesfamilyfuneralcentre.ca or through the Jones Family Funeral Centre Facebook page.

Due to current Covid restrictions, a memorial service honoring Danny’s life, will be held at a later date.  The family will make every effort to advise family members and friends of the date and time.