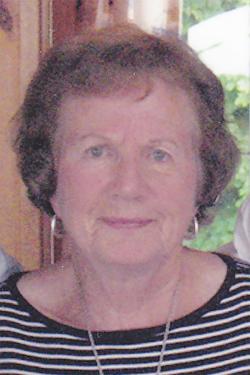 It is with deep sadness that we announce that Shirley Ann Estabrooks, 82, of Amherst, NS, and formerly of Sackville, NB, lost her battle with cancer and died peacefully at the Cumberland Regional Health Care Centre on Sunday, April 18, 2021. Shirley was a daughter of the late Henry and Evelyn (Jones) Trewin.She started her secretarial career with Eaton’s in Moncton and later with the Government of Nova Scotia up until her retirement.

Shirley was a world traveler with her husband Bob.  She enjoyed dancing, gardening, attending local festivals and touring with their vehicles throughout Canada and the US. She was a loving and devoted wife and mother who loved her grandchildren dearly.

Arrangements are under the care and supervision of the Jones Family Funeral Centre, 70 Church Street, Amherst, NS (902-667-8777).  Cremation has taken place and a service commemorating Shirley's life will be held at a later date to be announced when restrictions are eased.  Interment will take place in the Sackville Cemetery.

Donations in memory of Shirley may be made to the VON, the Cumberland Hospice, or a charity of the donor's choice.

Sharing of memories and condolences may be sent to the family by visiting Shirley's online memorial at www.jonesfamilyfuneralcentre.ca or through the Jones Family Funeral Centre Facebook Page.