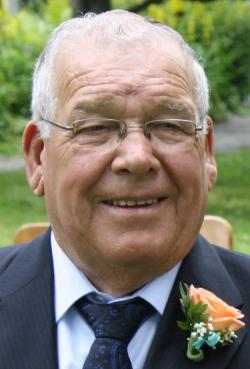 It is with broken hearts that we announce the passing of Donald James Brown, age 87, of Joggins, NS.  Donald passed away peacefully on Wednesday, March 31, 2021 at the Cumberland Regional Health Care Centre with his loving family by his side.

Born in Lower Cove, he was a son of the late William and Roseanna (Legere) Brown.

Donnie spent his younger years working in the Joggins and River Hebert Coal Mines before later transitioning to a fisherman. Both jobs had their share of hard work but Donnie never complained or "sweated the small stuff". His most cherished duty however was a loving husband to his beautiful wife Laura of 63 years and proud father with a special bond to his 4 children. He made Joggins his home but his heart was always in Economy, NS. where he spent his summers clamming and bass fishing at the cottage (lovingly known as "The Cove") surrounded by his family and friends. Donnie loved to laugh and joke with all who visited, and always wore an enormous smile. He had a passion for music whether it was listening to old time tunes or singing and playing his guitar alongside his loved ones. He adored his hunting trips with his boys and his McDonald's trips with his girls. In his later years Donnie was happiest at the cove driving his golf cart or sitting on the cottage deck overlooking the water with the Carter Family music playing and Laura by his side. His good natured personality and irreplaceable presence will be dearly missed by all who knew him. His sense of humour and his laughter will be remembered forever, far and wide.

"Donnie" as he was known to his family and friends will forever be remembered as a kind gentleman and fun-loving jokester.

Besides his parents, he was predeceased by brothers Austin, Earl, Robert and Clifford; sisters Edith, Violet and Shirley.

Our family wishes to thank the dedicated medical staff at Cumberland Reginald Health Care Centre for their compassionate care.

Arrangements have been entrusted to the Jones Family Funeral Centre, 70 Church Street, Amherst, NS (902-667-8777).  Private family service will be held in the near future.

Donations in memory of Donald may be made to the Heart and Stroke Foundation or charity of choice.

Sharing of memories and condolences may be sent to the family by visiting Donald's online memorial at www.jonesfamilyfuneralcentre.ca or through the Jones Family Funeral Centre Facebook Page.