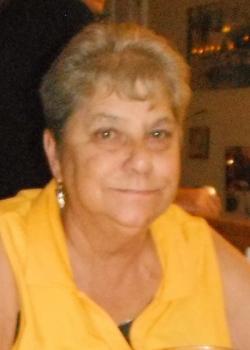 It is with heavy hearts that we announce the passing of Jennie Laverne Maas (nee Chapman) of Tidnish Bridge, NS in her 71st year. Jennie showed strength and bravery throughout her long hard fought out battle.

Jennie was born and raised in Amherst NS.  In her adult life she lived in BC, Ontario, and then came back to Nova Scotia settling in Halifax.  She and her husband Rick came back in 2007 to retire in Tidnish.

She was predeceased by her father Wyman Chapman and mother Pearl (MacKinnon) Chapman, brother Warren Chapman and by her youngest son Terry Dixon.

Jennie had a kind and generous spirit. She worked various jobs over the years and was a caregiver to many many children. She was there to help with raising her grand-kids who have so many good memories with her. Jennie was cheeky and could cut you with one of her looks. She was stubborn and headstrong which kept her with us much longer than we thought.  Those traits live on in her son and grandchildren.

Jennie had many special friends; in Halifax she was family to Nancy and Nichole who called her Aunt Jennie, as well as Dene and Elva. She was a member of Tops for many years. She was famous for her Canada day parties that always brought everyone together.

Jennie enjoyed playing cards with the girls, many tea parties with her lady friends and the odd glass of Jack's strawberry wine.

Jennie was loved by so many and will be missed beyond measure.

Her family would like to thank the doctors and nurses on 4F in the Dr. Georges L Dumont Hospital who took such good care of her over the last year and a half; as well as the nurses and doctors in the Cumberland Regional Health Care Centre over the last few days of her life.

Arrangements have been entrusted to the Jones Family Funeral Centre, 70 Church Street, Amherst, NS (902-667-8777).  A public funeral will be held on Saturday, March 27, 2021 at 2 pm from Jones Family Funeral Centre.  Pre-Registration is required.  Please call the funeral home to register your attendance.  Masks are required, and it is asked that all follow Covid Regulations.

Donations in memory of Jennie may be made to the Canadian Diabetes Association, or a charity of your choice.

Sharing of memories and condolences may be sent to the family by visiting Jennie's online memorial at www.jonesfamilyfuneralcentre.ca or through the Jones Family Funeral Centre Facebook Page.

"Amazing grace, how sweet the sound that saved a wretch like me, I once was lost, but now am found, was blind but now I see..."