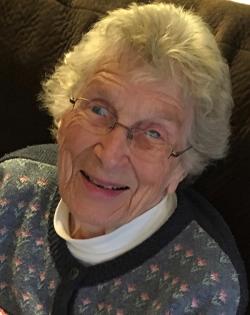 It is with immense sadness we announce the passing of Jean Isabel Smith, age 96, of Amherst.  Jean passed away at White Birches Retirement Residence on Sunday, February 14, 2021 with family by her side.

Born in Pugwash, NS, she was a daughter of the late Harold and Blanche (Laird) Atkinson.

One of a farm family of ten children, she moved to Amherst during the war years where she worked on aircraft assembly at Canada Car for the war effort.  An excellent athlete, Jean was inducted into the Amherst Sports Hall of Fame for both hockey and fast pitch. Jean was also a proud member of Unit 3 UCW at Trinity-St. Stephen’s United Church.

Jean, husband Foreman, and family spent many years trailering with their friends.  Foreman loved to travel and Jean loved returning home.  Jean talked Foreman into purchasing land in Amherst Shore where they eventually built a cottage.  She also convinced their close friends Ken and Lorayne Thompson into buying and building next to them where many long lasting memories were created, including Jean's requirement for her steaks to be cooked "very, very, very well done".

After Foreman’s passing, Nanny Jean (as she was known to all who knew her) dedicated her life to her children and grandchildren. Her cookies, which had always been in demand with both Don and Rhonda's friends, found a new fan base with all of her grandchildren and became an especially prized feature at their fund raisers. She spent countless hours at extracurricular events, sleepovers, puzzle making, playing hockey in the driveway or making mud pies. She could be found crawling around on the floor with her great grandchildren who she found such joy in.

‘Jeannie Girl’ had a sense of humor like no other, her witty and sarcastic personality brought joy to all who knew her. Even in her last days she was telling jokes and making people smile.  Jean never wanted to miss a social gathering and could be found many evenings out and about Boomer Loop or Aggermore Point.

Nanny Jean’s last couple of years were spent at White Birches Retirement Residence where she was loved by all, it truly felt like home to her. We can’t thank the staff enough for the great love and care they gave her, with special thanks to Gwennie.

Arrangements are under the care and supervision of Jones Family Funeral Centre, 70 Church Street, Amherst, NS (902-667-8777), where cremation has taken place.  A graveside service will be held in the Shinimicas Bridge United Church Cemetery at a later date.

Donations in memory of Jean may be made to the Shinimicas Cemetery Society , or the charity of your choice.

Sharing of memories and condolences may be sent to the family by visiting Jean's online memorial at www.jonesfamilyfuneralcentre.ca or through the Jones Family Funeral Centre Facebook Page.

Click here to View Condolences
Requested Charity
Shinimicas Cemetery Society , or the charity of your choice