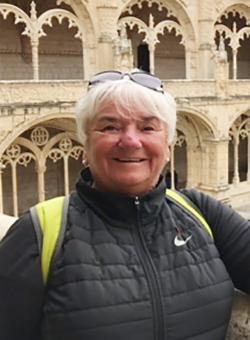 It is with profound sadness that we announce the passing of our dear Mom and Nanny/Grammie Pam (Barkhouse) Harrison on January 7, 2021, after a very short illness.

Her greatest blessings were her 3 children; Dean (Lynn), Barronsfield, NS, Angie (Darrell), River Hebert, NS; Kent (Lynda), Amherst, NS; as well as her 6 grandchildren, Alex (Christina), Ben, Mitchell, Chloe, Madison, and Sam.  She taught these children what a good time was all about.  She was fortunate enough to see the magic in the eyes of each child as they experienced the magic of Disney, a highlight for us all.  She was also so proud of her nieces and nephews, Pam (her namesake), Heath, Isaac, Seth and Madeline Claire, and great nieces Katya, Talia and Gertie.

Mom graduated from River Hebert Rural School.  Later in life she received diplomas from St. Mary's and the University of Cape Breton.

Mom was a world traveler visiting 7 continents, 89 countries and was fortunate to see the 7 wonders of the world.  Last year she visited her 100th Unesco World Heritage site, which was in Spain.

In 2014 she fell in love with Portugal earning her the title "Portugal Pam".  How she looked forward to packing her lime green backpack and escaping the snow.  She made so many dear friends there, and she was so sad to not be making plans to return due to Covid-19.  She always told us she had never met a stranger.

Mom received many distinguished awards through her lifetime, such as the Paul Harris Fellowship Award-major donor, founding member of Paul Harris society district 7810, Rotary International Citation for Meritorious Service, Rotarian of the year 1028, and the Canada 125 Award.

She was manager of the Amherst Centre Mall for 9 years, where she put her love of fundraising to good use.  She was so proud of the Gift for Gloria Burke campaign as well as many other successful events.

She went on to work for Cumberland Regional Development Authority; where her greatest accomplishment was the creation of the "I want to be a Millionaire" program, touching the lives of young entrepreneurs all over Cumberland.

She retired from her position on the General Council of the United Church at the age of 70.

Mom's two passions were Rotary International and her work with the United Church.  Some of these projects were: End Polio Now Campaign, going as far as to lead a team to do Polio Vaccinations in India in 2005:  The Bed net fundraiser, which raised enough money to protect 300 families: Shelter Box for hurricane victims in Haiti: Installed water filtration systems in the Dominic Republic for 3 consecutive years: Purple Pinky day at RHES to raise money to eradicate Polio.

After retirement, she thought it would be fun to try her hand at doing a few marathons (walking not running, which she would only reveal if asked), she participated in the Bluenose as well as many other local marathons.

Thanks for all the memories.

Arrangements are under the care and guidance of the Jones Family Funeral Centre, 70 Church Street, Amherst, NS (902-667-8777).  There will be an evening of visitation and a funeral, as soon as some of the COVID-19 restrictions loosen.  This will be announced soon.

In lieu of flowers, in true Pammie style, she would like you to perform a random act of kindness, and a smile to remember all of her kindness.

Sharing of memories and condolences may be sent to the family by visiting Pam's online memorial at www.jonesfuneralhome.ca or through the Jones Funeral Home Facebook Page.

Click here to View Condolences
Service Time
Funeral and Visitation will take place as soon as we can gather comfortably
Service Location
Jones Family Funeral Centre, Amherst, NS
Burial Date
Spring
Burial Location
Amherst Cemetery
Requested Charity
Pam would like you to perform a random act of kindness, and a smile to remember all of her kindness.