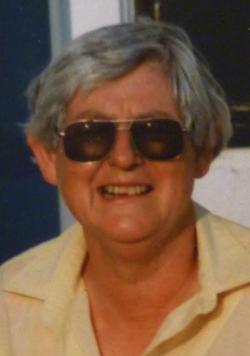 It is with deep sadness we announce the passing of Audrey Joan Chappell, age 85, of Tidnish Bridge, NS. Audrey ("AJ") passed away at High Crest Nursing Home, Springhill on Saturday, October 24, 2020 with her devoted sister-in-law, Ruth Chappell, by her side.

Born in Tidnish Bridge, NS, July 7, 1935. Audrey was the only daughter of the late Fred and Pearl (Helm) Chappell.

After leaving Tidnish Bridge, Audrey lived in Western Canada, mostly in British Columbia, for 25 years working with Canada Post. She travelled extensively, including Australia, but no matter where she lived, she always came back to Nova Scotia whenever she could. Once while living out west, she arrived on the family’s doorstep in Nova Scotia on Christmas Eve as a surprise after telling us she would not be able to get home that year and had sent gifts and a Christmas card saying " Wish I could be there for Christmas".

She relocated back to Nova Scotia (Halifax) to finish off her career in the post office. Upon retiring, she moved back to the "Ole Place" Chappell Homestead built in 1835 on the Tidnish Head Road, where she stayed until just 5 months before her death.

She was the last surviving member of her immediate family and was predeceased by her brothers John William Chappell in infancy and Keith Helm Chappell. She is survived by her very special sister-in-law, Ruth Chappell, Tidnish Bridge, who was instrumental to Audrey being able to stay in her own home for many years. She is also survived by three nieces, Kim (Chappell) Ouellette, Andrea Chappell, and Michele Chappell, known affectionately as 1st, 2nd, and 3rd niece respectively, five great-nieces (Claire, Maria, Lydia McInerney, Anna and Rosie Ouellettte) and two great-nephews (Liam McInerney and Rejean Ouellette). Audrey was loved immensely by her family. She meant the world to all of us. There will never be another Audrey, and we are so fortunate to have had this most loving, caring, loyal, generous, and selfless person in our lives.

Arrangements are under the care and guidance of the Jones Family Funeral Centre, 70 Church Street, Amherst (902-667-8777). Cremation has taken place. A family celebration of Audrey's life will be held at a later date.

Donations in memory of Audrey may be made to the Arthritis Society, the Cumberland VON, or your charity of choice.

Sharing of memories and condolences may be sent to the family by visiting Audrey's online memorial at www.jonesfamilyfuneralcentre.ca or through the Jones Family Funeral Centre Facebook Page.