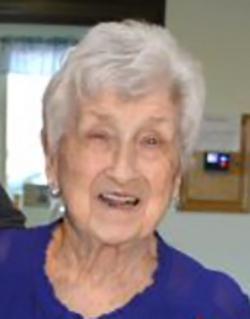 Blanche was born in Sydney, Nova Scotia on May 1, 1920, the eldest of ten children of Guy and Matilda (Chiasson) McKenzie.

She attended Holy Angels High School. She spoke fondly of her school friends as well as summer vacations spent with her Chiasson cousins at the farm in St. Joseph du Moine.

Blanche met her husband Frank ("Andy") Andrews while he was in Sydney doing military training. Andy persisted in his courting until she eventually agreed to marry him, a marriage that lasted 76 years until his passing in 2017. Together they lived in a variety of places throughout Andy’s military career – Westphal, NS, Barrie, ON, Chibougamou, QC, and Stirling, ON – until retiring to Florida, River Bourgeois, Halifax and finally Amherst. Blanche made lifelong friends at every stop.

Blanche was a talented painter, an eager hostess and an avid conversationalist. She could and would talk to anyone about whatever their interests might be and was genuinely interested in getting to know people.  Most of all she loved to shop, and to generously share her bargains with her family and friends.

Blanche had five children – Franklyn Lemoine (Napanee, ON), Robert ("Bobby"), Wendy MacLeod (Barry) (Amherst, NS), Marsha (Vancouver, BC) and Laurene ("Laurie") (Halifax, NS). She also raised her youngest siblings, Cora Bourgeois and Raymond McKenzie, for a time after the death of their mother. She was a loving grandmother to Kelly (Michael Wile), Deanne (Mark Forward) and Jason MacLeod, Rick (Carol) Lemoine and Petrina Lemoine and Geoffrey and Rachel Andrews. She found great joy in being a great-grandmother to eight great-grandchildren.

The family would like to thank the staff at Centennial Villa who treated Blanche like family, particularly during the last few months in isolation, and the nursing staff of the medical unit of Cumberland Regional Health Care Centre, who made her last days peaceful and comfortable.

Arrangements have been entrusted to the Jones Family Funeral Centre, 70 Church St., Amherst, NS (902-667-8777) where cremation has taken place.  internment of ashes to be at Ste-Marie-Madeleine Cemetery, Ste-Marthe-du-Cap, QC and St. Joseph du Moine Cemetery, Cheticamp, NS. A celebration of life to follow when permitted.

Should friends desire, memorial contributions may be made to the charity of your choice.

Sharing of memories and condolences may be sent to the family by visiting Blanche's online memorial at www.jonesfamilyfuneralcentre.ca or through the Jones Family Funeral Centre Facebook Page.