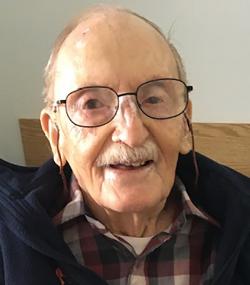 Charles Austen Rose, 100 yrs of age, passed away peacefully on May 1, 2020 at Gables Lodge in Amherst NS following a brief illness.

Austen was born in South Maitland, Hants County NS on April 17, 1920 and was the son of Charles Austen Rose Sr. and Annie Elizabeth (McCullough) Rose.

Austen moved to Springhill as a young child when his father purchased what became the family farm where he grew up delivering Rose's milk with horse and wagon to many homes in the town of Springhill. Austen later moved to Amherst where he worked in many roles and later managed Cumberland Co-op Services. Following this he became the representative of Co-op Insurance Services selling Home, Auto and Life Insurance throughout Cumberland County. In 1967, Austen was appointed Tax Collector for the Municipality of Cumberland County where he worked until his retirement in 1985. Following his retirement, he worked a few more years with Walton Allen doing electrical, plumbing and floor refinishing in the surrounding area. Austen also taught the Provincial Hunter Safety Course for 16 years.

Austen lived a very active lifestyle and always preferred to walk to local destinations rather than drive. He cut his own firewood until he was 90 and often was called upon to cut trees for neighbours and friends in the area. There was no job too big for him to tackle and he was fearless in his approach. Austen loved old time music and couldn’t resist an old fashion waltz or fox trot. In recent years he was known to do some singing at Centennial Villa and Gables Lodge.

Austen was a long time member of Trinity St Stephen United Church serving in many capacities. He was also a Life Member of the Amherst Y's Men’s Club and a long standing member of the Cumberland Twirlers Square Dance Club. He was well know for his volunteer work and was recognized as Volunteer of the Year for his contributions to his community. Austen and Shirley enjoyed the family cottage in Lorneville, NS for many years as well as camping with the Fly Away Campers Club of Amherst.

Austen is survived by his two daughters, Carol Ann Rose of Tidnish Bridge and Sharon Rose (Dave Mason) of Newcastle, Ontario, as well as grandchildren, Thomas and Severn Mason-Rose, and several nieces and nephews.

Besides, his parents, Austen was predeceased by his wife of 62 years, Shirley Elaine (Pugsley) Rose, sisters Thelma (infant), Clara, and brother Carman.

The family would like to express their sincere appreciation to all the Staff of Gables Lodge for their dedication and kindness to Dad over the past year and especially his 100th Birthday celebration which he enjoyed so much.

Arrangements are under the care and supervision of Jones Family Funeral Centre, (902-6667-8777), 70 Church Street, Amherst where a Family Only funeral service will be held on Saturday, May 9, 2020 at 2:00PM.  Due to Covid-19, this service will be available to all via Livestream by visiting Austen's obituary on the Jones Family Funeral Centre's website.

Donations in memory of Austen can be made to Trinity St. Stephen United Church or a charity of your choice.

Sharing of memories and condolences may be sent to the family by visiting Austen's online memorial at www.jonesfamilyfuneralcentre.ca or through the Jones Family Funeral Centre Facebook Page.