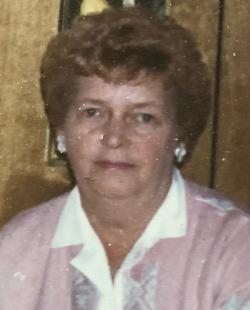 It is with great sadness we announce the peacefull passing of Carole M. Davis on  Friday, December 13, 2019  at the Cumberland Regional Health Care Centre. Carole was born to the late Raymond A. and Beatrice J. (Johnson) Hayes, October 18, 1934, in Springhill, Nova Scotia.

Carole graduated from the Springhill High School in June of 1952. Carole married the late Frederick Davis in September 1955.  Fred’s military career took them to many locations over the years including Summerside P.E.I., Marville France, Toronto ON, Greenwood N.S., and Amherst N.S.  With the birth of their son Paul in 1956, and daughter Cindy in 1958 Carole dedicated her life to her family. She was the consummate homemaker. She was a particularly accomplished baker, with the Davis home often engulfed in the aromas of fresh baked pies, cookies, and cakes. One of Carole’s biggest joys was the celebration of special family occasions. Christmas, Easter, and family birthdays, were always big events in the Davis household. As her children became more independent Carole decided to work outside the home. She worked for Sears Canada in Amherst, retiring after approximately 15 years as Manager of the Amherst store. Next to her family Carole cherished her independence more than anything, and she lived out her life comfortably in her Amherst home. One of her favorite pastimes was to read biographies, and watch classic movies, especially westerns. In the last few years she had help from family, friends, and local care professionals for which she was eternally grateful.

She was predeceased by her husband Fred Davis in March, sister, Donna Henwood, and a brother William (Brud) Hayes.

Arrangements are under the care and direction of A H Brown Funeral Home, 5 McFarlane Street, Springhill, (902 597 2361).  A Graveside service will be held at the Hillside Cemetery, Springhill on Thursday, Deceber 19, 2019 at 2 p.m. A time of fellowship to follow at A.H. Brown Funeral Home, Springhill. Should friends desire, memorial contributions may be made to the Heart & Stroke Foundation.

Sharing of memories and condolences may be sent to the family by visiting Carole's online meorial at www.brownsfuneralhome.com or through the A H Brown Funeral Home Facebook Page.