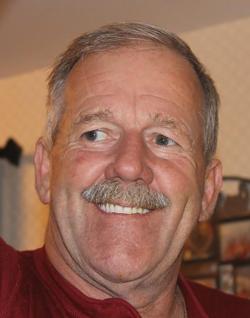 AMHERST - Surrounded by his loved ones at his home in Amherst, George William Kinnear, 64, left this world as a true warrior with grace and dignity after succumbing to his battle with cancer on Wednesday, September 4, 2019.

George was the son of Joseph and Lois (McFadden) Kinnear.

An avid farmer from a very young age, he continued to fulfill his passion until recent years, in addition to working fourty plus years for the Chignecto Central Educational Centre. George left a lasting impression to all those he met.  His dry sense of humour followed by a smirk, and a big heart, were some of his many characteristics. George enjoyed hunting, fishing, and the outdoors with his wife and dog, Sullivan, bird watching and gardening in his backyard, regular visits and phone calls with his Mom, and spending time with friends and family.

Arrangements are under the care and guidance of the Jones Family Funeral Centre, 70 Church Street, Amherst (902-667-8777).  A celebration of George's life will be held from the funeral home on Sunday, September 8, 2019 at 3 pm with a reception to follow.  Interment will take place in the Amherst Cemetery.  William Drysdale DLM presiding.

Donations in memory of George may be made to the Canadian Cancer Society or the Cumberland Palliative Care.

Sharing of memories and condolences may be sent to the family by visiting George's online memorial at www.jonesfamilyfuneralcentre.ca or through the Jones Family Funeral Centre Facebook Page.