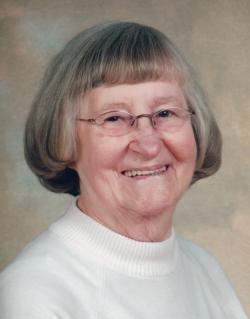 It is with sadness we announce the passing of G. Marie McBrien, age 91, of Brookdale, NS.  Marie passed away on Thursday, August 1, 2019 at the Cumberland Regional Health Care Centre.

Born in Brookdale, NS, she was a daughter of the late Almon and Bessie (Bird) Newcombe.

Marie was trained as a nurse in the Moncton Hospital in the 40's, returning to Amherst in 1954 where she nursed at the Highland View Hospital as a maternity nurse until the 80's, retiring to care for her mother.  She was a member of the First Baptist Church, Amherst.

She was predeceased by her husband Jack; son Douglas; brother Walter Newcombe and brother in law Ken Siddall.

Arrangements are under the care of the Jones Family Funeral Centre, 70 Church St., Amherst, NS (902-667-8777) where an Afternoon of Remembrance will be held on Sunday, August 4 from 2 to 4 pm.  A graveside service will be held in the Amherst Cemetery at a later date.

Those wishing to make a donation in Marie's memory may do so to the Heart and Stroke Foundation, or the charity of your choice.

Sharing of memories and condolences may be sent to the family by visiting Marie's online memorial at www.jonesfamilyfuneralcentre.ca or through the Jones Family Funeral Centre Facebook Page.