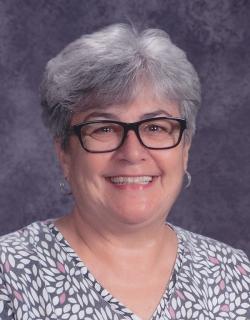 It is with great sadness that the family of Gloria Marie Dwyer, age 64, of River Hebert announce that she passed away peacefully at home surrounded by family on February 29, 2020.

Born in Amherst on December 27, 1955, she was the daughter of the late Roger and Helen (Wood) Droesbeck.

Gloria began her working career at Simpson Sears and then as the Cafeteria Manager at the River Hebert District High School for 35 years before retiring in June 2018 where she was instrumental in establishing the School Breakfast Program.

Gloria's number one priority was always her family and close friends; she enjoyed organizing gatherings and special meals with family and friends.  Gloria cherished her summer vacations at Heather Beach and spending time with her grandchildren Gage and Maeve.

In addition to her parents, she is predeceased by brothers Alex, Stewart and Verden Droesbeck.

Arrangements are under the care and direction of the Jones Family Funeral Centre, 70 Church St., Amherst, NS (902-667-8777) where visitation will be held on Sunday, March 8, 2020 from Noon until 2 pm followed immediately at 2 pm by her funeral service, William (Bill) Drysdale, DLM officiating.  Gloria will be laid to rest beside her parents at a later date in the River Hebert Cemetery.

In lieu of flowers, donations may be made to the School Breakfast Grab & Go – River Hebert District School, Cumberland Regional Health Care Centre Palliative Care unit, or charity of choice.

The family would like to thank the doctors and nurses of the Oncology Unit at the Moncton Hospital, the Cumberland Regional Health Care Centre Palliative Care Team, and the Cumberland VON, especially Dr. Bobadilla and his staff for the excellent care given to Gloria during her courageous battle.

Sharing of memories and condolences may be sent to the family by visiting Gloria's online memorial at www.jonesfamilyfuneralcentre.ca or through the Jones Family Funeral Centre Facebook Page.