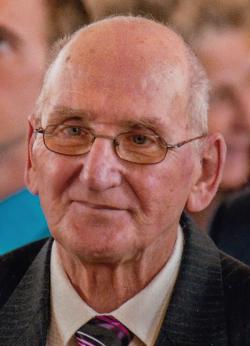 Ardelle Walter Jones, age 82, of Amherst, passed away at the Cumberland Regional Health Care Centre on Thursday, February 27, 2020 after a long hard fight with Pulmonary Fibrosis.  He was proud he beat all the records on longevity with the disease.

Born in Salem, NS, he was a son of the late Harold and Marian (Simmons) Jones.

Walt had many proud accomplishments, with just a grade ten education, he attended Dalhousie University as a mature student, graduating with BA with Honours, and a BEd from Queens University in Kingston, Ontario.  He wrote and had a play produced locally, wrote a weekly column for the newspaper, and just recently had a paper published in the Nova Scotia Heritage Society Magazine, the Griffen.

Walt loved to travel and spent many years after his diagnosis traveling to dozens of countries.  Music events, camping and dancing were his hobbies and he was never happier than on the dance floor, or driving his camper van to another musicians get together.

He was predeceased by brothers John, Harold, James and Carson and sister Joyce.

Arrangements are under the care and direction of the Jones Family Funeral Centre, 70 Church St., Amherst, NS (902-667-8777).  At Walter's request, cremation has taken place with a private burial in the spring.  There will be a gathering of family and very close friends in May at a date to be determined, held as his home, to celebrate his life.

Those wishing to make a donation in Walt's memory may do so to the Palliative Care, the VON, or the charity of your choice.

Sharing of memories and condolences may be sent to the family by visiting Walt's online memorial at www.jonesfamilyfuneralcentre.ca or through the Jones Family Funeral Centre Facebook Page.