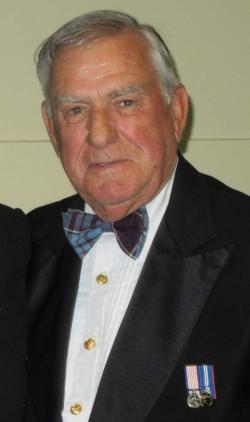 Ivan J. Gould, 83 years of age, of East Amherst, passed away peacefully at the QEII infirmary with his family by his side on Thursday, November 7, 2019. Born in Shemogue, NB he was a son of the late Leo & Lea (Jacob) Gould.

Ivan was a Corporal in the Canadian Air Force. He worked at Robb Engineering, IMP, was a material manager for Northern Telecom. Ivan owned and operated Kelly's Ambulance  (1982) Ltd until 1996 when he and Sylvia retired. Ivan loved to read, especially Louis L'Amour books.  He was a collector of John Wayne memorabilia. He enjoyed traveling, to Europe, Cuba & Florida. He was a Amherst Jr. Ramblers fan, and enjoyed watching his grandson play hockey.  Ivan was always busy, tinkering in his yard, making wine and entertaining family and friends at his cottage in Tidnish. He enjoyed playing cards, especially 45's and Rummoli. Ivan was past president of the RCAF Atlantic Group and amongst many awards, he was the recipient of the Queens Golden Jubilee medal award and the Commemorative Medal for the 125th Anniversary of the Confederation of Canada.

Should friends desire, memorial contributions may be made to the Cumberland County Hospice & Palliative Care Society, or the charity of your choice. Sharing of memories and condolences may be provided by visiting Ivan's online memorial at www.jonesfamilyfuneralcentre.ca or through the Jones Family Funeral Centre Facebook Page.