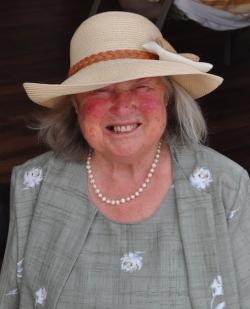 It is with sadness that the family of Judith Rose Hubbard (Reeve) announce her passing on Friday, September 20th, 2019 at the Cumberland Regional Health Center.
Judith is survived by three brothers, William, Nick, and Simon; seven children, Benjamin, Edward, Suzanne, Nicola, Haynes, Lydia, and Francis. The Hub-Club has grown to include 15 grandchildren and six great grandchildren. She was predeceased by her husband, Charles.

Judith was born in Norwich, England in 1933, the eldest of four of the late James and Hesketh Reeve (Spencer).

After school and following her lifelong love of four legged creatures with a saddle, she worked as a stable hand and groom in England, Ireland and Switzerland before meeting something two legged that caught her eye; Charles. With their mutual love of each other and the land, they set about a life of farming initially in Wales, then England. In 1969, with family and animals in tow, they sailed into Pier 21 and settled in Shinimicas, Nova Scotia.

When she wasn’t raising seven children, milking 40 Jersey cows, engaging with the NS Federation of Agriculture, studying St. Augustine at King’s College, writing for Rural Delivery, and hosting an endless steam of diverse international agricultural students, she found a sliver of time to get on a horse now and then.

At 66, with grown children scattered across the globe, she and Charles transitioned from full on commercial farming to a more sedate, organically orientated, farm lifestyle. Then she met Leonard, her spotted ‘fire horse’. Together with her extended Galloway Stables family, she returned to her stable hand roots. She not only enjoyed riding but, as was her want, was incredibly generous with up-and-coming riders of all ages - first and foremost being her grandchildren. Age did not stop Judith from being curious and a yearning to learn new things. She would avail herself of different instructors and clinicians, often sponsoring other riders who shared her passion. Known as the Grand Dame of Galloway Stables, Judith set the bar and will be greatly missed for her kindness, generosity and wisdom.

A few years back, along with a billion others, Judith signed up for a Facebook account. Unlike slightly less than a billion others, her musings were thoughtful, poignant, inclusive, and eminently wise, drawing on a profound understanding of Mother Nature and our collective need to wake up and look after our little patch called Earth.

Arrangements have been entrusted to the Jones Family Funeral Centre, 70 Church St., Amherst, NS (902-667-8777). There will be no visiting hours. A funeral service will be held at Christ Church, Amherst, on Wednesday, September 25 at 4PM. Fr. Will Ferrey officiating. Burial will take place in the parish cemetery.

Following the service, a potluck reception will be held at Art of Eating Deli, 91 Victoria Street East, Amherst. Please label food and ownership of pot.

Those wishing to make a donation in Judith’s memory may do so to Feed Nova Scotia: https://www.feednovascotia.ca/donate